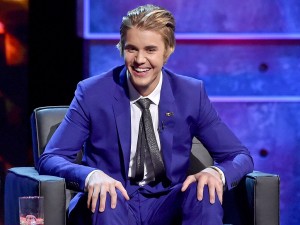 Host Kevin Hart said it best in the first few minutes of Comedy Central’s Justin Bieber Roast: “Tonight we are gonna do what parents and the legal system should have done a long time – give the boy an ass-whuppin’ he deserves.”

And with that, the shellacking of the 21-year-old pop star began, starting with a video montage that included all of Bieber’s embarrassing legal woes and continuing with a tidal wave of cracks about the singer’s pre-pubescent fanbase, his goofy songs and all those appearances on Ellen.

And that was just when Ludacris, comedian Natasha Legerro and Shaquille O’Neal took the stage Saturday on the Sony lot outside of Hollywood, the site of the Bieber roast taping.

How exactly does a panel of African-American rappers, comedians, a ex-basketball player and a professional homemaker roast a guy like Bieber? With gleeful abandon and lots of bleeps by the standards and practices department. Besides countless f-bombs and references to female sex organs, there were nine Bill Cosby jokes, three Bruce Jenner yuks and way too many Selena Gomez references to count. Ron Burgundy – a.k.a. Will Ferrell – made a surprise appearance, and first-time roaster Martha Stewart absolutely killed.

All the while, a purple suit-wearing Bieber either slapped his knee while busting a gut or sat quietly, looking like a frightened deer.

“Damn, you guys were brutal,” Bieber said at the end of the roast. “This was supposed to be a birthday present. When people ask me what I got for my 21st birthday, I’ll tell them I got my d— kicked in. I should have known.”

And then, in an expected serious turn, Bieber looked straight into the camera and apologized for his past behavior.

“I lost some of my best qualities,” he said. “I’m looking forward to being someone to be proud of. Someone close to me once said how you rise from a fall is how you are truly defined as a man.”

The roast doesn’t air until March 30 on Comedy Central. But here are 21 of the night’s best jokes that should tide you over until the big night:

“Bieber has 10 million fans – most are in middle schools, or standing at least 500 feet away from one.” – Kevin Hart

“Congratulations Hannibal Buress, you are only the Bill Cosby accuser making money off of him.” – Snoop Dogg

“I always encouraged people to stay classy. And what’s more classy than hanging out with Floyd Mayweather?” – Ron Burgundy

“Justin’s fan are called beliebers because it’s politically incorrect to use the word retards.” – Natasha Legerro

“A lot of people are upset that Justin hasn’t won a Grammy. There is Martha Stewart. She can be your grammy.” – Jeff Ross

“Selena Gomez couldn’t be here tonight. Just because she didn’t want to be here.” – Kevin Hart

“Jeff Ross, you’re the only person on this dais making 95 percent of your yearly income tonight.” – Hannibal Buress

“Kevin is the only celebrity with a star on the yellow brick road.” – Shaquille O’Neal

“Martha is so old, her first period was the Renaissance.” – SNL‘s Pete Davidson

“Justin as a father of six you have to straighten up, son. Last year, you were ranked the fifth most-hated person of all time. Kim Jong-Un didn’t rank that high. And he uses your music to torture people.” – Shaquille O’Neal

“I’ve come up with a douche that no one has ever heard of, you know, like Chris D’Elia.” – Martha Stewart

“Justin, you are the King Joffrey of Pop.”– Jeffrey Ross

“All these rappers on stage and Martha stewart has done the most jail time.” – Natasha Legerro

“He’s Justin Bieber’s favorite comic, which is why he has ‘duh’ in the middle of his name.” – Kevin Hart, introducing Chris D’Elia

“Those Calvin Klein billboards you made are terrible. And I was in Whitney.” – Chris D’Elia

“Kevin, you are everywhere. He is going to be on the next season of Game of Thrones. He’s going to play Peter Dinklage’s shadow.” – Natasha Legerro

“What do you get when you give a teenager $200 million? A bunch of has-beens calling you a lesbian for two hours.” – Justin Bieber