Taylor Swift spotted with a RING and Joe Alwyn

Taylor Swift preforms for her 5th time on Saturday Night Live since her career started in 2009. She did not, however, have any part in any skits this time around. She preformed two songs off of her new album, including the album name “Lover” and she also preformed “False God.”

What got Swifties talking was of course seeing Taylor and her boyfriend, Joe Alwyn, at an after party. Taylor and Joe are very private about their relationship and are hardly every spotted in public. While walking into the after party at a club in New York called, Zuma, the couple of three years held hands. Taylor shielded her face with her right hand from paparazzi and flashed a rock to the flashing cameras. Immediately the rumors started to fly the the couple were engaged, but of course the ring was on the wrong hand. Check it out for your self. 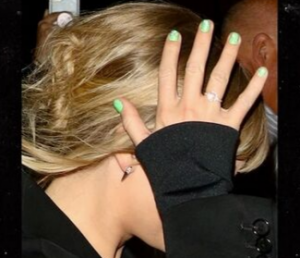