Access Hollywood broke the news at the premier of Tom’s latest movie, “A Beautiful Day in the Neighborhood,” where he portrays Mr. Rogers. The two are sixth cousins! Mr. Rogers was a half-hour educational children’s program starring Rogers and it was on air from 1968 on. It ran for 895 episodes and countless reruns. Mr. Rogers was a staple in the lives of many children. Tom and his wife, Rita Wilson, were shocked when an Access Hollywood reported paused to talk to them at his premier. According to Ancestry.com Tom Hanks and Fred Rogers are 6th cousins. They also say quote, “Johannes Mefford immigrated from Germany to America in the 18th century.  Johannes raised a family of patriots . . . three of his sons (including Tom Hanks’ and Fred Rogers’s ancestors) served in the Revolutionary War.” Rita immeditaly said, “No way! There’s no way!” And asked to keep a copy of the Ancestry Report. When asked how he felt, Tom replied, “It all just comes together, you see,” and then he joked, quote, “I would like to see if Johnny Depp is related to Fred Rogers.  Can you find out from Ancestry.com?” 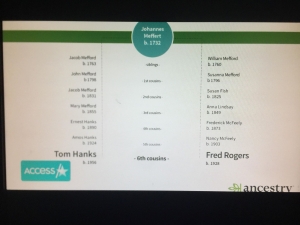