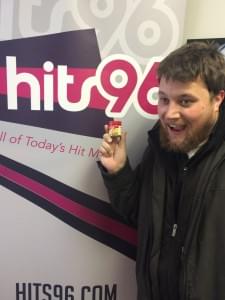 Intern Alex began his career in entertainment at the age of 5, when he perfected his imitation of the infamous former Krystal mascot, “Bob.” A lifelong wrestling fan, Alex was nearly ejected from elementary school when he was found to be the ringleader of a gang of fellow Ultimate Warrior fanatics. As a teenager, he found himself again enamored with a low-class dining establishment when he composed his first hit song, “Waffle House, Y’all.” However, as the roller coaster that is entertainment would have it, Alex soon found himself at an all-time low when, while employed as a pizza delivery man, his vehicle was robbed of 7-10 fresh pizzas at a local apartment complex. It was then that he ultimately decided it was time for a career change, and, on the heels of his “D is for Degree” college graduation decided to try his hand at stand-up comedy. Unfortunately, his hands aren’t very funny, so naturally, he was hired by  Hits 96. To this day, Intern Alex remains as the second least-talented radio personality in Chattanooga.

Party all day and night at the 12th annual Main Times 24 Party on Saturday December 1st. Join Hits 96 as we take part in all the fun and excitement at one of the cities biggest celebrations. This event is free to the public and there is something…

Your home for the CFC is on Hits 96!  Get VIP access and Tickets to every home game each afternoon with Brad and Intern Alex! Or click below to buy tickets to these home games

Daily, Chattanooga’s most influential thinker is back with another set of deep thoughts…

BradGirl Goes To The Movies