Let’s hop in our flying DeLorean, fire up our flux capacitor, and head back to the year 1986 in Chattanooga. What a difference thirty years can make. Wait…where’s the Tennessee Aquarium? Why can’t I walk across the Walnut Street Bridge? I can’t seem to find Hamilton Place mall. Am I even in the right city? What the Hell happened? This is bizarre. Let’s check the newspaper…The Chattanooga News Free Press? Is anything the same? Okay, Rock City’s still up there on the mountain, people are still having wrecks on the 24/75 split, and people are still getting their laughs at The Comedy Catch. 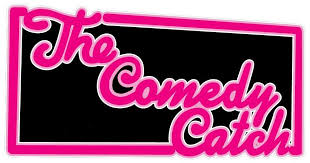 Yes, The Comedy Catch has become a Chattanooga institution over the past thirty years. Thirty years in business is impressive, but thirty years in show business is unheard of. Over the years, the locations and performers have changed. From humble beginnings atop theDowntown Holiday Inn to their long tenure at the Brainerd road location The Comedy Catch has had Chattanoogans up in stitches. “Chattanooga’s most fun night out” recently moved to their “location of the future” in the renovated Chattanooga Choo Choo entertainment complex. Throughout the greater part of their three decades in the scenic city, the man at the helm has been owner Michael Alfano. The notion of a comedy club succeeding in a small city like Chattanooga would be laughable to some entrepreneurs, but Alfano took the chance and now he’s laughing all the way to the bank. While many performers have graced the stage of The Comedy Catch and given you a glimpse into their genius, but what do we really know about the genius of Michael Alfano? That’s our mission here at Hey Celebrity What’s In Your Fridge?™ to give you a look behind the freezer doors of faculty and a glimpse inside the crisper bin of creativity. Fire up the Freon, here’s our foray into the first fridge of 2016. 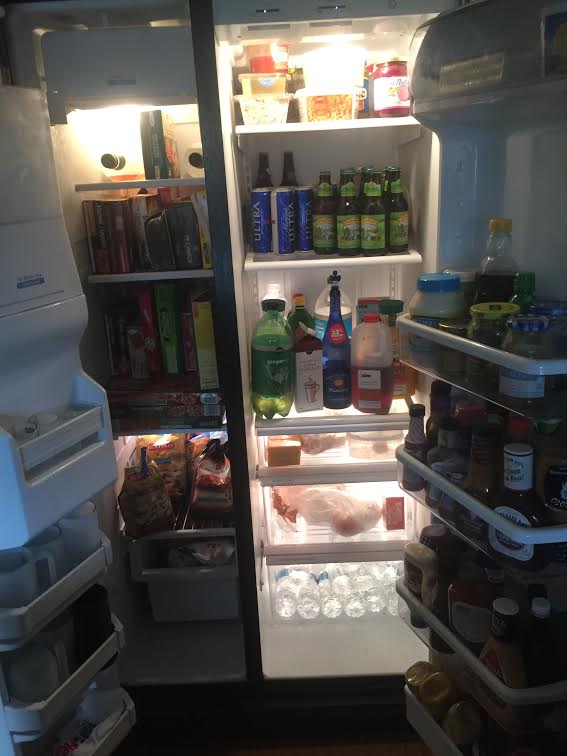 Just as The Comedy Catch has opened its doors for the past thirty years, Michael opened both doors of his fridge for us. It’s the very rare delicious double doors of delight. Bravo! Comedy is largely about leaving it all on the stage and Alfano embodies it here by leaving it all here on the showcase of the shelves.

Just as his Comedy Catch sticks with what works, Alfano sticks with the classic double door design and not the trendier French door style.
It’s a good thing he’s got in­door ice because it looks like he needs the extra freezer space. This freezer is an absolute work of art! It’s
the Sistine Chapel of pre­prepared frozen dishes. It even features the work of Michael Angelo! Yes, Michael Angelo’s chicken piccata…eccezionale! Perhaps this is Alfano’s homage to his Italian roots, or perhaps he just loves that distinctive butter sauce. Just
because he longs for the frozen fruit of his ancestors doesn’t mean his palette is limited. No, Alfano’s freezer serves up delectable offerings from all the legendary chefs: Tostino, Mrs. Paul, Gordon, Bertolli, and Paul Newman. Why go to the local PF Chang’s when you could have it any time you wanted in your very own freezer? This powerful production of pre­cooked meals is positively pleasing. In the freezer door we have an assortment of frozen glassware complemented by two mystery bottles at the top. With dinner pre­prepared you’ll have more time to drink. Cheers!

There’s something amiss over on the refrigerator side. We have one of the best condiment selections ever featured on HCWINYF™ but nothing to combine them with. How can a refrigerator be this full and have nothing to eat in it? The crisper bins are used for bottled water, some garlic, one tomato (or apple), processed cheese slices, and bread. A nice variety of juices, a little Riesling wine ensure that any thirst can be quenched. Sierra Nevada Pale Ale and Michelob Ultra are his beers of choice showing that he knows how to count calories and still likes to splurge on occasion. On the top shelf we have some more prepared dishes like macaroni and cheese and (potato salad?)followed by a few varieties of pickles. Are pickles considered condiments? The debate rages on.

We here at HCWINYF™ have a theory as to why there isn’t much raw food in Mr. Alfano’s fridge. It takes work to keep an institution like The
Comedy Catch afloat. He’s too busy with Pauly Shore to go all Paula Deen in his kitchen. Just as he keeps a variety of condiments stocked
in his fridge he has to keep a variety of acts booked for the club. He’s skipping home cooked meals to ensure that Chattanooga can have a
laugh and with that kind of dedication, you don’t need much refrigeration. 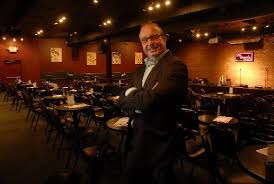