Bryan Mizell of the Chattanooga Veterans Administration was 2019 named Nurse of the Year in a special ceremony Wednesday, February 19, hosted by Hits 96 and its sister radio stations, Sunny 92.3, Q-97.3/99.3 and Alt 98-7.

Bryan was nominated alongside more than 400 other area nurses by their patients, peers and others in the community during a six-week period. Bryan was nominated by a veteran who credits him for saving his life when he was about to commit suicide. “If Bryan had not talked me off the ledge, my wife would not have a husband and my kids would not have a father,” wrote the patient who nominated him for the award. “I can never repay him for what he’s done for me and so many other veterans.”

Bryan Mizell has the distinction of being the Tennessee Valley’s first Nurse of the Year recipient. He received an award and over $1,000 in cash and prizes.

This year’s award was sponsored by Food City along with support from Salsarita’s Fresh Mexican Grill and Massage Envy. 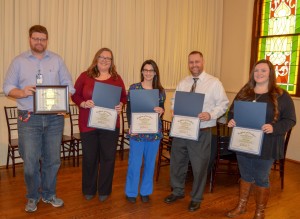 Home for the Holidays

The Island In Pigeon Forge Is This Week's Finally Friday Deal