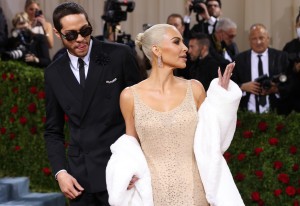 During the 2022 Met Gala, Kim stunned the world by wearing a dress by iconic actress Marilyn Monroe. Kim looked great, she lost 15 pounds thanks to her diet, but apparently the diet triggered a Psoriasis flare. She said, “Psoriasis broke out over my body and I got psoriatic arthritis so I couldn’t really move my hands.” She added, “It was really painful, and I had to go to a rheumatologist who put me on a steroid. I was freaking out. I cut out the meat again, and it’s calmed down.” The reality star also said that consuming meat as a part of her diet to blame.

Losing 15 pounds to fit into Marilyn Monroe’s iconic dress not only caused psoriasis, but a ton of backlash. She explained, “If I was starving and doing it really unhealthy, I would say that, of course, that’s not a good message. But I had a nutritionist, I had a trainer. I have never drunk more water in my life. I don’t see the criticism for other people when they lost weight for roles — they are [considered] geniuses for their craft. There are so many things out there that are so not accurate and not true.”

Need A Good Side Hustle

A Cost For Being Lazy