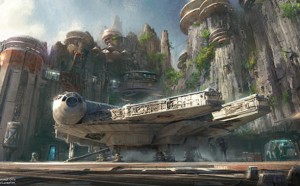 The Han Solo actor and roly-poly droid were part of ABC’s Disneyland 60 tribute to Walt Disney’s first park and their appearance heralded the latest galactic addition to both the Disneyland park in Anaheim, California, and Walt Disney World in Orlando — the Star Wars Experience.

“Star Wars is, for lack of a better word … awesome,” the actor said in his introduction. “I’m so blessed that I had the opportunity to be a part of it. To walk in these iconic locations. And soon, you’ll be able to do that as well. Not in a galaxy far, far away, but in a place close to home.”

After the telecast showed off new concept art of the attractions — including a virtual reality ride that allows guests to control the Millennium Falcon in an aerial battle with the First Order — an orchestra launched into a performance of the scores from the Star Wars saga.

The footage, which hasn’t been officially released online, included some shots from the cockpit of the Falcon as it flies into battle, and also said the Star Wars Experience would include encounters with aliens and droids, as well as food vendors selling otherworldly delicacies. Blue milk, anyone?