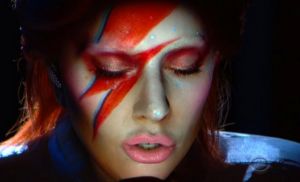 Lady Gaga offered a show-stopping Grammys tribute to music’s greatest innovator tonight. The pop star has long considered David Bowie one of her personal heroes and a major influence on her own career and aesthetic, which has always skewed toward the theatrical.

“When I fell in love with David Bowie, when I was living on the Lower East Side, I always felt that his glamor was something he was using to express a message to people that was very healing for their souls