Tropicana Made the 1st Cereal for Orange Juice Instead of Milk 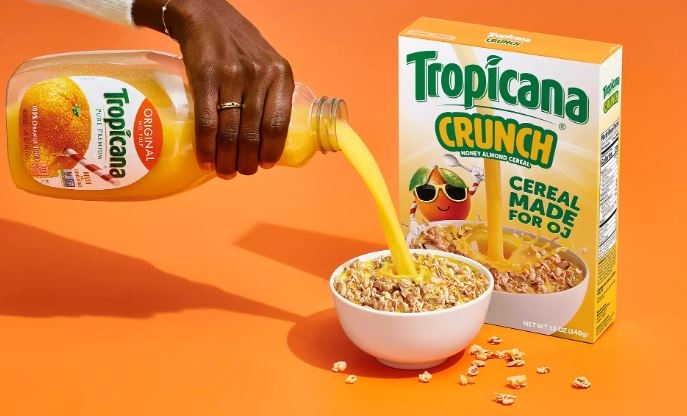 It’s kind of amazing that this has never been done before … but maybe it’s because it can’t possibly be good…  Right?!

Tropicana just announced they’ve created the first breakfast cereal that you’re supposed to pour ORANGE JUICE on instead of milk.

It’s called Tropicana Crunch.  They say it’s a “honey and almond” cereal that’s “granola-style,” because flakes would get too soggy too fast.  In the picture they posted which is above, it kind of looks like Honey Bunches of Oats without the corn flaky bits.

They say they experimented with all kinds of flavors and textures, and came up with the PERFECT cereal to eat with Orange Juice.  The honey and almond flavors are supposed to counteract the tartness of the juice.

Now unfortunately, you can’t buy it, at least not yet…  They’re releasing it for National Orange Juice Day next Wednesday.  And they’re giving boxes away for free while supplies last.  Just go to TropicanaCrunch.com on May 4th to try to snag a box.

Despite the hype, even Tropicana admits you might not like it.  Their site describes it as “the first cereal made for OJ… and maybe the LAST.”

They claim there are people out there who already prefer orange juice on their cereal though, so maybe there’s a market for it.